Mötley Crüe was the first band I fell in love with, back in 1985 when I was 14. After a few years, I stopped listening to them, and didn’t listen to them again until I was in my mid-forties. I discovered that I still loved the Crüe’s music — but I also noticed, really for the first time, the misogyny that is an important part of the  Crüe’s lyrics and legend.

I also learned via Instagram that girls and young women all over the globe still adore Mötley Crüe. To help these new fans appreciate the Crüe without internalizing sexist messages that can put them at harm, I created an Instagram account named Feminist Nikki Sixx.

This article was originally written as a series of six posts for that account. 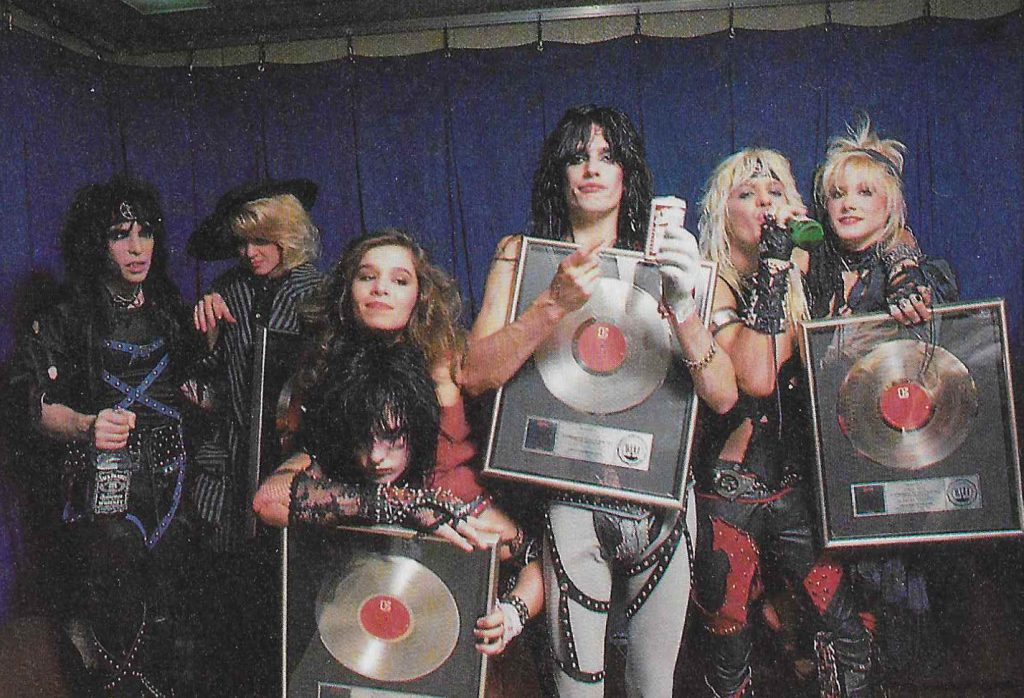 An A.V. Club review of Mötley Crüe’s 2001 autobiography, The Dirt, observes, “Mötley Crüe didn’t invent rock-star decadence, but they perfected it.” I would add that the Crüe perfected decadence by performing it: in front of cameras, on the pages of magazines, and in their best-selling memoirs. Decadence means “luxurious self-indulgence”; the Crüe indulged themselves in drinking and drugs, physical violence, being shitty to other people (Nikki Sixx is so mean to Mick Mars as self-reported in his autobiography, The Heroin Diaries), and sex as conquest. They became famous in part because of their decadence, and they certainly cashed in on it. This week’s posts will explore the Crüe’s construction of masculinity through decadence, the implications and dangers of the concept of sex as conquest, a possible reason for the Crüe’s inability in their later years to seriously address reasonable challenges to their identity as sexual conquistadors, and what this all means for the Crüe’s female fans. 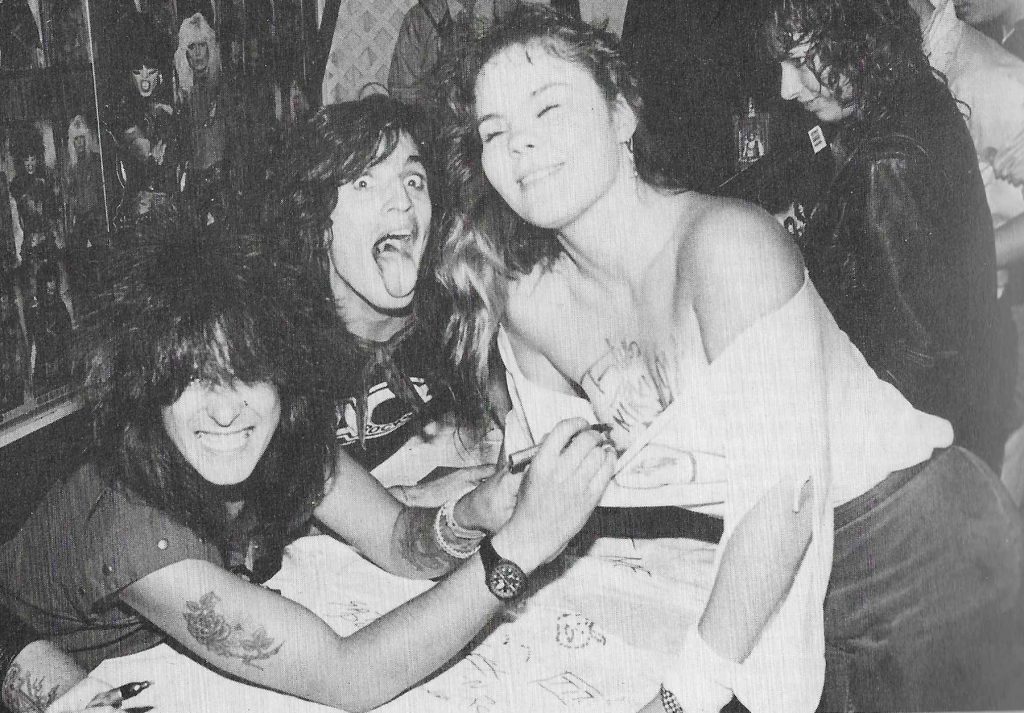 There are lots of different ways to have sex; the kind of sex that the Crüe performed for the public in their heyday was sex as conquest. According to Anita Sarkeesian, conquest sex “sees female bodies/sexuality as collectible/consumable and positions women as status symbols designed to validate masculinity.” Like hunters who keep taxidermied heads of animals, the Crüe kept Polaroids and items of clothing as mementos and trophies of their sex acts. As with big-game hunting, bagging certain animals confers more status than others. From Dante Bonutto’s fawning official 1985 biography of the first five years of the Crüe, we learn that band members got points based on the attractiveness of the girls they had sex with: “ten points for a centerfold type chick, one point for a good-looking chick, and five demerit points for an ugly one.” We also learn that the lowest-status girls were the ones who had sex with the road crew for backstage access. These girls received a “Pre-Show Pussy” pass that let everyone know that the girl had already had sex with the road crew and was therefore undesirable to the band members.

The most status-conferring sexual conquests went on to become legend — stories told and retold because whether they either inspire or frighten, the extent of their transgression awes. There’s the legend about the time the Crüe put a phone inside a groupie’s vagina and then had her call her mother from it. Another: the time Nikki was on a call-in radio show and a girl called in. When Nikki found out she was 12 years old, he said, “Good, I like twelve-year-olds. You get to hear the bones crack when you put it in.” It was not in spite of but because of the transgressive nature of these acts that they went on to become legend, earning the Crüe status.

So their heyday, members of Mötley Crüe consumed women’s bodies decadently, defiantly, and publicly. The Crüe’s access to and consumption of women’s bodies made them heroes to many and increased their earning power. But assuming that all parties are consenting adults (this was not always the case with the Crüe), is there anything wrong with sex as conquest?

Use You Up, Throw You Away 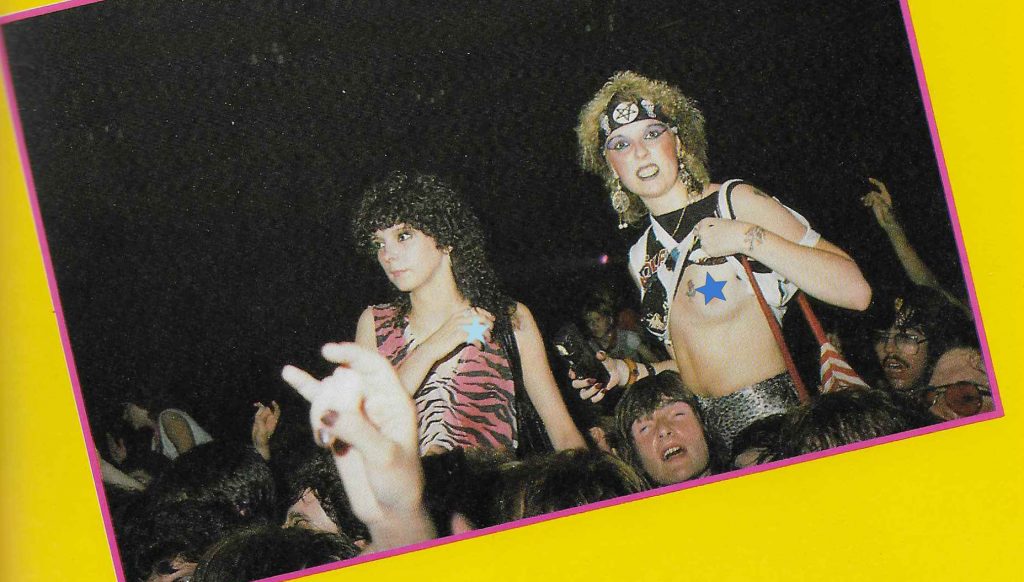 Sex as conquest is a concept and goal that creates dangerous realities for women. Men who put a high emphasis on sexual conquest for peer status and self-esteem are driven to induce or force women into sex. This leads directly to violence against women — street harassment, domestic violence, rape, and murder. The news is full of tragedies that have resulted from male entitlement to female bodies. And to bring it back to Mötley Crüe: Even among the members of the Crüe, who had all the sexual access and ego validation they could need, sex was taken without permission. Their official biography, The Dirt, documents Tommy Lee having sex with an unconscious woman without her consent.

The Crüe’s days of on-the-road gang-bangs and documenting them in their memoirs seem to be over. Their days as sexual conquistadors are behind them. So maybe things are better now? 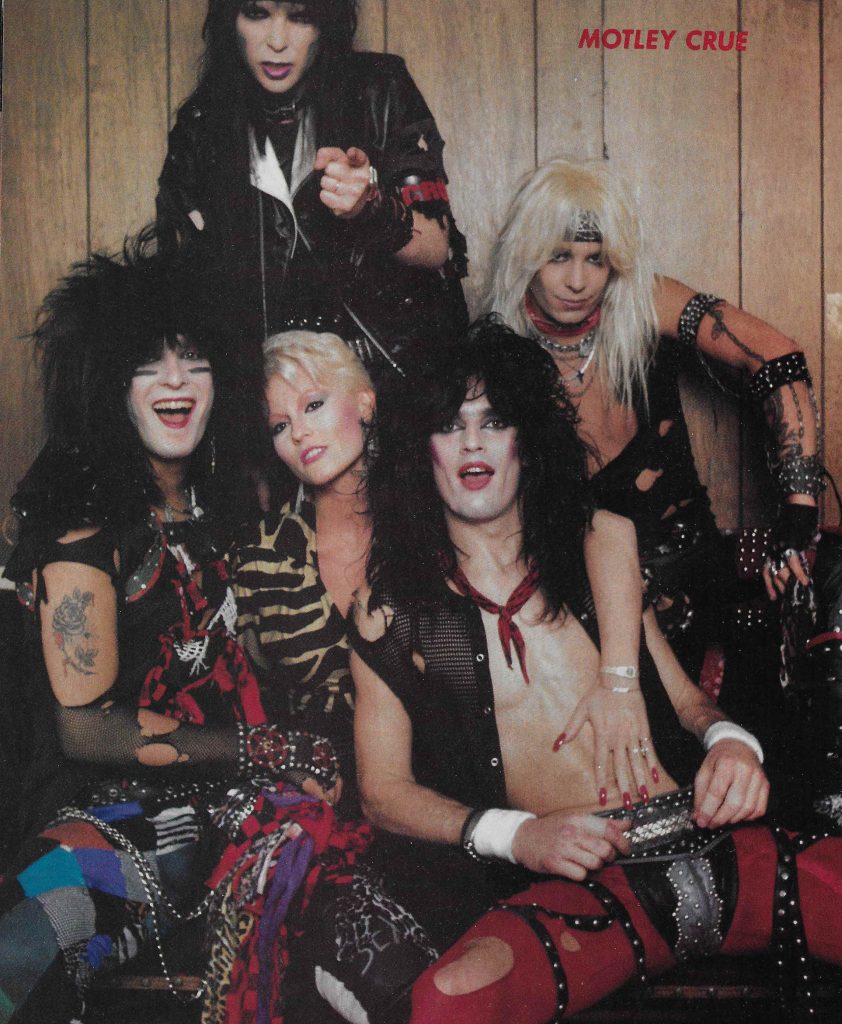 To me, where the Crüe lets down their female fans is when they are questioned now, in the 21st century, about the sexism of their former lyrics, legend, and behavior. In 2009, when Vanity Fair asked Vince if the Crüe’s lyrics “treat women fairly,” he replied, “Of course not! We’re guys. We’re rock musicians. We treat girls like shit.” In 2013 in a Reddit AMA session, in response to the question, “What is your opinion on the sexualization/objectification of women in modern society?” the Crüe answered, “Please refer to the lyrics of 10 Seconds to Love.” This was spot-on if depressing, because “10 Seconds to Love” depicts exactly the dynamic we’ve been discussing here: a sexual conquest performed to gain status with other men.

Bring a girlfriend, maybe bring two
I got my camera, make a star outta you
Let’s inject it, photograph it
Down to the subway, let the boys have it.

It’s a long way from 1983 and the Crüe are now living different lives — in Nikki’s case, a life of sobriety, marriage, and fatherhood. The Crüe’s dance has changed; why hasn’t their tune?

This Is Gonna Hurt 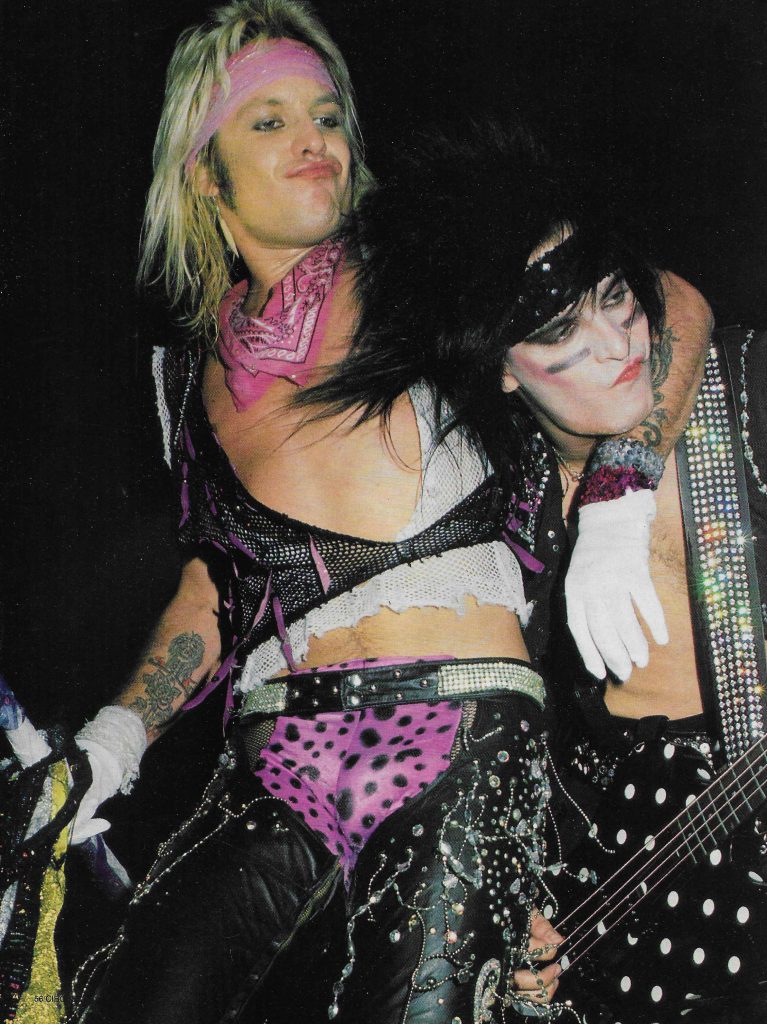 It’s a testament to the power of the Crüe that they continue to win new fans — and notice how many of those fans on Instagram are teen girls and young women. But when challenged in the recent past about the sexism of their former lyrics and legend, replies from the Crüe have been a defensive return to form, a circling of the wagons: “We’re sexist and that’s the way it is!” I have to wonder: Why can’t the Crüe do better than that, especially when so many of their fans are young women, and when Nikki and Vince are themselves the fathers of young women? Are they too dumb, old, or drunk to change their tune?

Seems kind of mean to say, but could be. But I’ve also come to believe that the Crüe also cling to their sexist image because it’s still an important piece of their mighty brand. A film adaptation of their autobiography The Dirt, their ultimate performance of decadence, is in production; if it hits the big screen, the Crüe will hope to cash in yet again on their brand as the baddest of boys.

If the Crüe continues to cynically perform sexism for financial gain, what does that make them? Well, that makes them mere businessmen — and not artists.

And that is probably the most hurtful accusation one could level against Nikki Sixx: that he’s not an artist anymore, but just a businessman.

Shout at the Devil 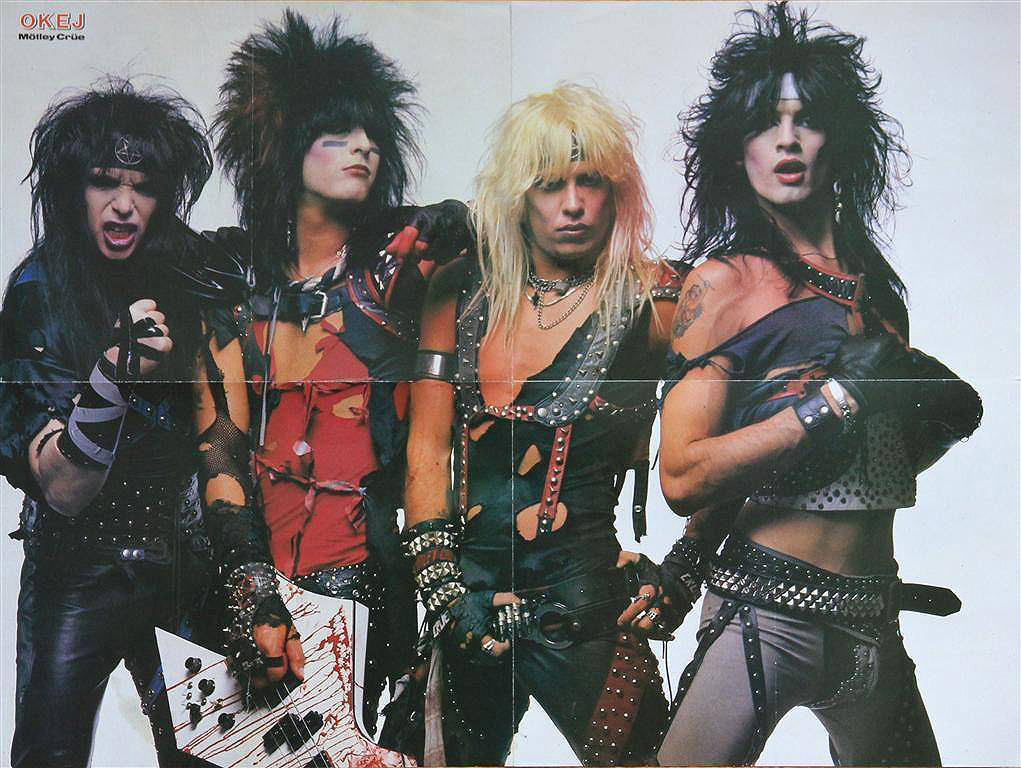 It’s not easy to look critically at our heroes. We all love Mötley Crüe for important reasons: because they entertain, turn on, inspire, speak for, or even save us. (In February I’ll be publishing an essay about loving Mötley Crüe, which I do, believe it or not.) But the more you love something, the more damage it can do to you when it doesn’t love you back.  So what to do, if you’re a female fan of the Crüe?

I say: love the Crüe critically so that you don’t unintentionally internalize their sexist messages, which can put you in danger’s way. Acknowledge the sexism of the Crüe, even though it might break your heart, so that you can move above and beyond it. When the Crüe represents women just as sexual trophies to be exhibited and then discarded, shout at the devil. When the Crüe says something sexist in the press, keep your eye on the money. Laugh at the Crüe’s limitations. Find other, additional heroes who do assert the value of your femaleness. Use up the Crüe for the beautiful melodies Nikki writes, the thunderous poetry of Mick’s guitar, Vince’s totally unique vocal style, Tommy Lee’s cowbell and famous cock, their lust for life, for their badness and rebellion and fuck-you-ness, for those smoking hot publicity shots from the 80s and 90s.

And know that for your ability to see both women and men as full human beings, no matter how brightly the star of Mötley Crüe shines for you, in this regard, your star shines brighter than theirs. You’re a rock star too.